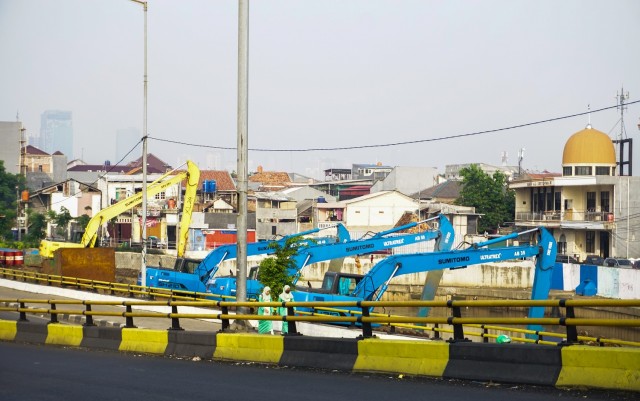 The normalization of drainage or connecting channels (PHB) around residents’ settlements and rivers is still a flagship flood management program in Jakarta. It was proven by rapid flooding or inundation within three hours and reduced flood points to 80 points in 2017 from 500 points in 2015. To run the River Normalization and drainage program, the main equipment used was the Long Arm Excavator model. This unit is very much needed to drain the riverbed, or even the river’s Ramp arrangement itself. Designed for the type of work used for Arm equipped with amphibious undercarriage.

Sumitomo Excavators provide the Long Arm model excavator option, the SH210LC-LR, for specifications of work that requires deeper and deeper reach. Such as: Deep excavation, river dredging, normalization of rivers, lakes and beaches, or other jobs that require extra reach. Users who use Sumitomo long arm a lot in Indonesia include the Ministry of Public Works, especially in the Water Resources Agency and UPT Alkal. Whereas there is not too much customer retention, because, in addition to its high cost investment, the majority of jobs are Government jobs under the Ministry of Public Works, which in fact already has a Long Arm unit.

Many heavy equipment from these two government agencies work along the river and canal, to treat and normalize rivers from the silting process and so on. Like the Department of Public Works, DKI Jakarta employs Long Arm Excavators along the East Flood Canal, to anticipate garbage piles, siltation and erosion prevention, structuring and maintenance of river or canal ramps. 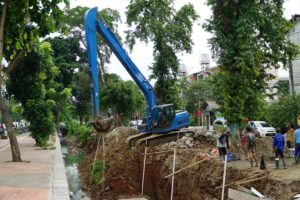 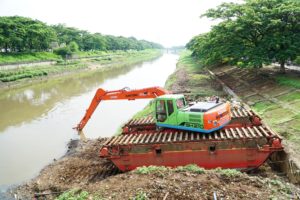 Found in the area of ​​East Flood Canal around Cipinang Indah Complex, Sutriyono, Operator of the SH210LC-5LR owned by the DKI Jakarta Water Resources Agency. He said that for a year more to operate this Sumitomo SH210LC-5LR Excavator, there had never been a problem, both on the engine and hydraulic systems. “If you enter the service routine, just stay in contact with the dealer, not immediately after the service is done. What we do is only greasing and the monitor or just adjust the Amphibious Track Strength. Its fuel consumption is economical compared to other brands I’ve used, “he added.

The low fuel consumption of Sumitomo Excavator is indeed the flagship of Sumitomo which makes the Customer begin to turn away and intends to try to prove it himself. Plus the super long range compared to other brands strengthens the customer’s assessment of the Sumitomo Long Reach Excavator.