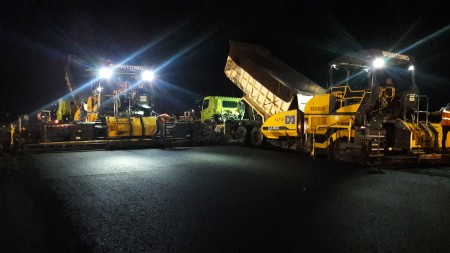 PT Angkasa Pura (AP) II while it is deploying a runway thickening or overlay at Husein Sastranegara Airport, Bandung. This year will begin to work on adding the power of the runway. This is done because of increased flight schedule to and from bandung as well as increased aircraft capacity. Improved economic growth and the appeal of Bandung as a city of culinary, tourism, and shopping trigger an increase in the number of passengers both domestic or manacanegara. The airport will be able to seat Airbus A320 with a capacity of up to 180 seats. A plane that can land after a throttled base, among them, Airbus 320, Boeing 737 900ER, and Airbus 319.

PT Dirgantara as the implementer of the runway base relies on two units of Sumitomo HC90C tandem to perform the construction of the asphalting. With the width of each stretch reaches 9m, Sumitomo HA90C able to work quickly and maximum results considering the airport work should be done quickly. According to Operational Manager of PT Dirgantara Bp Arvin Jahja Tjahjana various advantages possessed Sumitomo HA90C is very helpful for thickening asphalt of this airport.