PT. Mitra Karya Makmur has been doing business for 13 years, since 2003. The company engages in business in earthmoving works, general contractor, and also heavy equipment plan-hire. It was founded by Mr. Djoko Handoko.

The company has been in existence for a significant period. Completing every single project in time as well as meeting high standards of customer satisfaction, PT. Mitra Karya Makmur has built a relationship of trust with many of its customers. This is called “delivery of commitment.”

Some projects that have been being done by the company include cut & fill, grading jobs in BSD, Sentul City, Grand Wisata, Sentul Nirwana Bogor, a housing development (PP) with Nindya Karya, Kota Wisata, Legenda Wisata, development of jagorawi toll roads, development of roads leading to the
Soekarno-Hatta International Airport, the Outer Ring Toll Road Kebon Jeruk-Ulujami, as well as several other projects like Wijaya Karya’s projects, the International Industrial Area in KIIC at Karawang, and Delta Mas at Cikarang .

The company utilizes some heavy equipment such as excavators, trucks, and dozers of various brands, mostly of Japanese brands. One piece of equipment they operate is the Japanese-brand excavator “SUMITOMO” made in Karawang, West Java, Indonesia. All are of Japanese quality.

Mr. Djoko has recently purchased ten units of the new SUMITOMO excavator 20 ton SH210-5. This is a repeat order from his first trial of 10 units several months ago, bringing his current fleet of excavators to 20 SUMITOMOs.

Mr. Djoko also has just signed a PO for another batch of 10 units of SH210-5 for short-term deliveries. 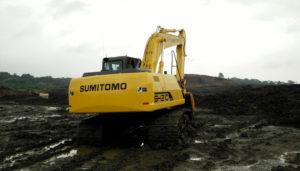 The company trusts the Excavator SUMITOMO thanks to referrals from some general contractors and others already using the equipment. This equipment is simply unrivalled in terms of efficiency and agility compared to other Excavator brands in its class.